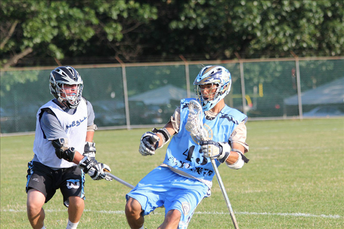 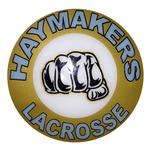 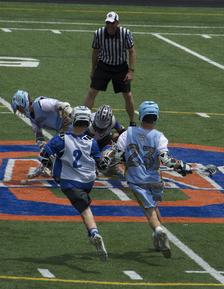 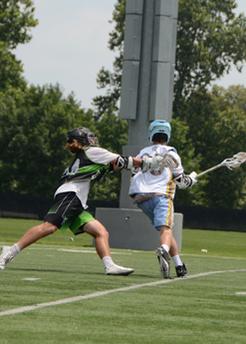 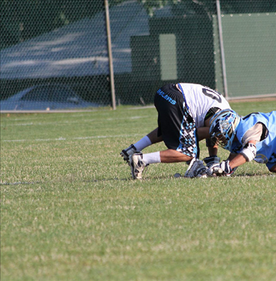 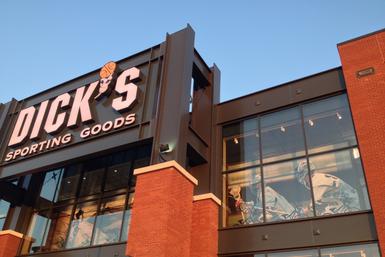 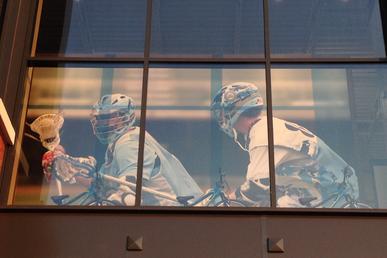 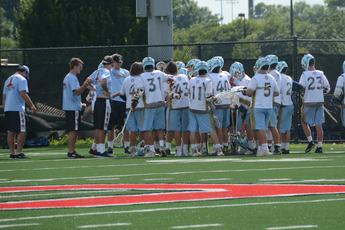 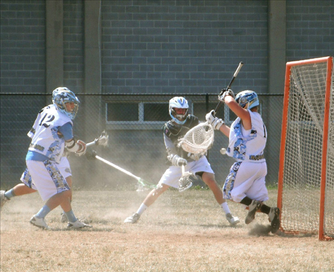 WHAT IS HAYMAKERS LACROSSE?

Haymakers Lacrosse is a Central Ohio U-19 select/developmental program, fielding teams for Rising Sophomores, Rising Juniors, and Rising Seniors.  As a point of fact, we are the longest established developmental summer lacrosse program currently in operation in Central Ohio.  While Haymakers Lacrosse enjoys representation by more than 20 different high school programs, we are extremely selective.  We are NOT for everyone.  Our squads are comprised of elite players, both talented and passionately committed to becoming the best lacrosse players that they can be.  Our mission is “To provide serious young lacrosse prospects with intensive and advanced instruction, experience, exposure, and guidance through the recruiting process.”  Our program is designed to maximize a player's readiness for, and opportunities at the collegiate level.

The depth of experience amongst our coaching staff affords players the most intensive instruction of all the area summer lacrosse programs.  On the field, we adhere to a rigorous curriculum.  In addition to gaining invaluable playing experience against the highest level competition, our players benefit from a proven teaching progression, instrumented through college-level workouts.

Have NO illusions; Haymakers Lacrosse is the ONLY central Ohio select program with experience recruiting, coaching, and guiding players through a four-year college lacrosse career and beyond!

Our numerous connections and established credibility amongst the current ranks of collegiate coaches allows us to market our players more aggressively, yet appropriately.  Haymakers Lacrosse’s ultimate goal is to find numerous college options for our players.  We strongly feel that after quality of education, it is paramount for a player to have a rewarding college lacrosse experience.  In our eyes, that means striking a balance between a stable, competitive program with a program in which a player can realistically compete for playing time.

WHY BE A HAYMAKER?

At Haymakers Lacrosse we know that young players seek out summer developmental programs with two primary goals in mind.  Players whom are truly committed seek a vehicle through which they can improve their game.  And, ALL players want exposure to college coaches.  In our experience, both can only be achieved through a simple formula....participate in the most competitive events possible.

College coaches have finite recruiting budgets.  Man-power is also limited.  Most college coaching staffs consist of just two or three individuals.  By necessity, college coaches must make the most efficient use of these limited resources.  They have to get the most "bang" for their recruiting budget.  The college coaches go where the highest concentration is to be found on any given weekend.  If you are not participating in those events; you are not maximizing your chance for exposure to the greatest number of college coaches.  It also follows that if you are not participating in those top events; you are not maximizing your time with regard to your potential for improvement.  Aside from falsely inflating one's ego, a player won't get anything out of playing against inferior competition. You can rest assured that playing for Haymakers Lacrosse means you WILL be playing in the top events, against the very best competition available.

At Haymakers Lacrosse, we promote all of our players equally.  We don't cater to politics.  There is NO favoritism afforded to players from any of the respective high schools represented on our rosters.  We ALL fly the same colors, and our colors don't run!  We rally around a common standard, and our players separate themselves solely by what they do on the field.

The Haymakers Lacrosse summer curriculum provides players with what they are looking for... and a whole lot more, including:

"Haymakers Lacrosse Club, simply put, is one of the best club lacrosse programs in the country. From the instruction the players receive, to the competition they play; everything they do is at the highest level. As a college coach who has several Haymakers players on my team, I would highly recommend their program to anyone."
- Mike Plantholt, Ohio Wesleyan University Head Coach, 2-time North Coast Athletic Conference Coach Of The Year, 2-time All American at Gettysburg College, former NCAA Defenseman of The Year

“I’ve had the pleasure of watching Haymakers Lacrosse grow as a club organization into a competitive tournament team.  I have been particularly impressed with the quality of play, as well as the direction of their leadership.  In a short time, the Haymakers have made great strides!"
​- Jim Stagnitta, Denver Outlaws Head Coach: former Rutgers University and Washington & Lee University Head Coach,  1999 NCAA D3 Coach of the Year

"The reason I like the Haymaker program is their kids are coachable and willing to do the work necessary to be a successful college lacrosse player. Their staff is extremely honest with their kids’ abilities, and as a result, does a great job of placing players at programs where they have the chance to be the most successful. Coach Pritchard has been around lacrosse for a long time, and has a great body of work to draw from. We are always recruiting a couple of their guys."
- Jay Owen, Wittenberg University Men’s Lacrosse Head Coach, former National Champion at Salisbury University

"Watching the Haymakers play is a priority of mine every summer.  As a college coach, you know are you seeing great talent.  You also know that when you recruit a player from the Haymakers Lacrosse Club you are getting a young man who is dedicated and has been given the instruction to be successful at the college level."
- Jason Tarnow, Baldwin Wallace University Head Coach, former All American and National Champion at Salisbury University.

“The Haymaker's Lacrosse Club is first rate, from being well organized, providing solid instruction, to well run practices.  That environment enables the young men in the program to grow as both players and people as well as get great exposure to all the top lacrosse programs at all levels of college lacrosse."
- Michael Caravana, Denison University Head Coach: former Team USA coach, 1994 NCAA D3 Coach of the Year, 8X MCAC Coach of the Year, Member of New York and Virginia Lacrosse Halls of Fame, 4X All American at University of Virginia

"We always look forward to watching the Haymakers play!  Hard working, disciplined, respectful and polite are a few of the words that come to mind when I think of the Haymaker players. We have two Haymaker players in our program here at Nazareth College so I see this first hand. They are well coached, very prepared and understand how to play lacrosse the right way. They coach their players to understand the meaning of hard work and what it takes to be successful at the next level. We hope to have a couple more Haymakers on our roster next year."
- Rob Randall, Nazareth College Head Coach: Nine Empire 8 Conference Titles, Six-time Empire 8 Conference Coach of The Year; Rochester Chapter US Lacrosse Hall of Fame

"As a college coach, I always look for three qualities in a club lacrosse program. 1) Competitive Environment; 2) Player Development, and 3) Honest Direction.  The Haymakers Lacrosse Club excels in all three of these areas.  All their teams are coached well and play with passion. On the business side, the Haymakers staff takes pride in supporting their players throughout the recruiting process.  I truly believe in the Haymakers Lacrosse Club."
- Kyle Hannan, Mercer University Head Coach: former National Champion at Salisbury University

"As a college coach I have watched the Haymakers play as an elite program for six years. They can compete with any premier program in the country.  Their staff coaches with passion and emotion and their players feed off that.  The players themselves play fundamentally sound and have a good IQ for the game.  Players that go through this elite program are ready for college due to their teaching and preparation.  I love their players year end and year out!"
- Mark Frey, Ferrum College Head Coach


“The Haymakers have proven to be one of the outstanding club teams I have seen over the past five years. The players are hard working, passionate and talented. That reflects on the coaches and administrators of the program. We have enjoyed watching them play and compete nationally.”
- Steve Beville, SUNY Cortland Head Coach: 2009 NCAA D3 Champions, 2009 NCAA D3 Coach of the Year,  3X SUNYAC Coach of the Year, 2X NCAA D3 Defenseman of the Year, 3X All American at Washington College


“Haymakers Lacrosse has become one of the premiere lacrosse clubs in the country. The Haymakers always have a wealth of talent, are well coached, and have been a very classy organization. Seeing them in the summer is a must for all college coaches.”
- Hank Janczyk, Gettysburg College Head Coach: 2008 NCAA Man of the Year, 2001 NCAA D3 Coach of the Year, 9X Centennial Conference Coach of the Year, Captain and National Champion at Hobart College

“Ohio has produced some very talented players.  Haymakers Lacrosse enhances this talent, and will take you to the next level.  The Haymakers’staff is very professional, and teach the game in a dynamic and exciting way.  They will push every one of their players to be better by the end of the summer and beyond.  I have learned a lot from the way Haymakers prepare their teams, and from how they always play with a college intensity and style!
​
We played the Haymakers at the Gait Cup (on our first tour of the States) and lost the game in over-time.  At the end of the game the parents, players, and coaches from Haymakers surrounded me and my players, hugging and high-fiving us.   That is sportsmanship of the highest order and we came away feeling like we had actually won the game!  This really made us feel special!   I think this sums up the Haymakers organization, they are special people from the coaching staff, to the parents!  My players, including my son, have made friends for life through this organization, and are still in touch with them today!
- Scott Weddell, English Knights Elite Lacrosse (UK) Head Coach: former Head Coach English National U-19 Team